150th Anniversary of the Missionnaries of Africa 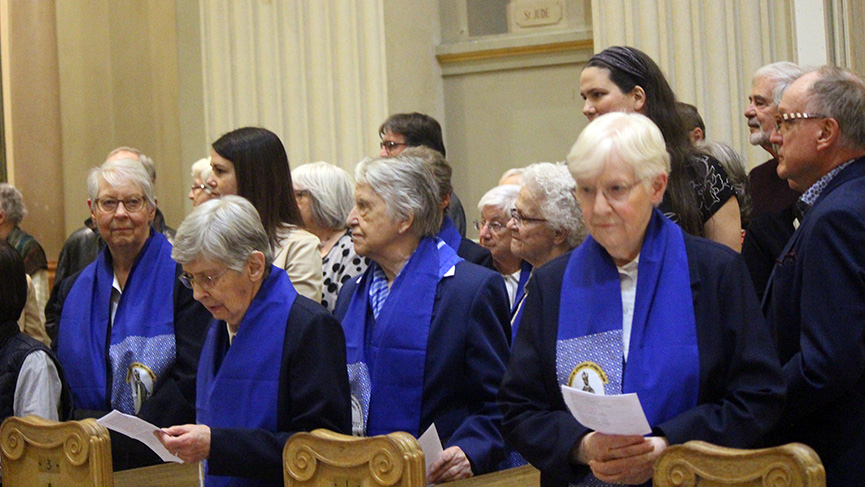 Many priests, brothers, sisters and laypeople gathered at Mary Queen of the World Cathedral on Tuesday, April 30, to honour the 150th anniversary of the Missionnaries of Africa with a Mass celebrated by Archbishop Christian Lépine, with about 30 priests concelebrating.

“As for any other African feasts, the chief of the village is present!,” said Father Réal Doucet, Provincial Superior in the Americas, as he welcomed Archbishop Lépine.

In front of an assembly largely made up of missionary nuns, the words of welcome of the Mother Superior of the Sœurs Missionnaires Notre-Dame d'Afrique were filled with gratitude. She first traced the history behind the Société des Missionnaires d’Afrique (Pères Blancs) [Missionaries of Africa] and the Sœurs Missionnaires Notre-Dame d’Afrique (Sœurs Blanches) [Africa Missionary Sisters], and then expressed her joy and gratitude to God for “sending us to Africa and being loved by this continent”. » Addressing the many priests and sisters now living in Canada, she invited them to embrace the future with hope: “Due to your calling, all stages of your life must reveal the love of Jesus Christ.”

As she referred to the many African refugees also living in Canada, Sister Elisabeth reminded everyone of their mission towards these populations: “anywhere, there is a need in this world for people to go and live within populations that are disadvantaged, in order to tell them they are loved; this is the foundation of our calling”.

An unconditional “yes”
In his homely, Archbishop Lépine emphasized the 150 faithful years consecrated to God, to Africa and the mission. He said he was filled with wonder seeing the ability of the Missionnaires d’Afrique to say “yes” without knowing what is to come ahead. Father Prosper incarnates this unconditional “yes”; he was wearing a colourful African shirt for the occasion. He had just come back from Africa and said smiling: “I do not know what I will do next, but I am now 60 years of age and I am confident He will tell me what I need to do. I trust Him.”

A “yes” forever and everywhere
“This has become a worldwide mission, and the priests, brothers and sisters who belong to the Missionnaires d’Afrique are called to mission everywhere,” pointed out the archbishop. At the end of the celebration, Father Doucet invited his brothers and sisters to pursue their mission in this particular village called Montreal: “as the chief of our village said, we have signed a blank cheque, yet with our hearts, so let us keep working here despite being far from our beloved Africa”.

Many missionaries have indeed chosen to fulfill their mission. After going through many years of war and hunger, a nun who has returned to Canada now takes care of her sick sisters; this is only one example. The Missionnaires d’Afrique inspire many laypeople, like Francine and Jacques who were present at the celebration and at the festivities that followed. “The nuns trained us, because we wanted to do volunteering work in Africa on the basis of our Christian faith,” they recalled. In 2003, upon returning to Canada after one year in Tanzania, they created with other missionaries the Les Laïcs Missionnaires de Notre-Dame d’Afrique. This association enables them to be financially independent and to partake of the same spirituality of the Sœurs Blanches. Each year, Francine and Jacques go back to Tanzania to look after handicapped children in a clinic located on Lake Victoria, in a context of sharing, giving, conviviality and prayer.

“The mission might come to change, but the Gospel does not; the human heart keeps loving and does not change”, reminded Archbishop Lépine the assembly. The joy brought by Africa does not change either, according to the testimonies of the nuns who, at the end of the celebration, joyfully danced to the sound of the djembe and sang with the Afrika Instshiyetu Choir.