The Badeneya Center at Bobo-Dioulasso takes care of pupils and students desiring to study outside the school periods.

The Missionaries of Africa have built this Study Center in 2012 called “The Budeneya” that caters to the needs of the youth in the city of Bobo-Dioulasso with its one million inhabitants. Father Emmanuel Adeboa, M.Afr. is current the director. 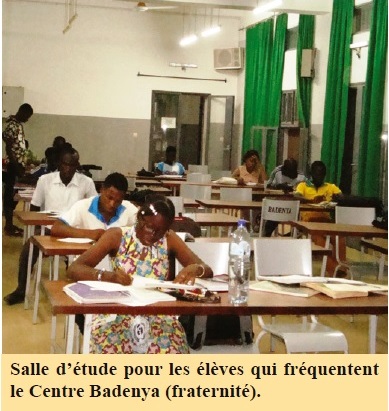 The Missionaries of Africa have been working in Burkina-Faso for over one hundred years. They have already handed over to the diocesan clergy almost all the parishes in the country. Their involvement today is quite diversified such as teaching, training, justice and peace, management of conflicts, interreligious encounters, etc.

Relying on their experiences in Ouagadougou and Bamako, where similar structures have taken shape, we try ourselves to help the needs of our youth at Bobo-Dioulasso, where the young people of school age is quite numerous and eager to be trained. More than 500 students have become members of the Library at the Center.

We have given the name of “Badeneya”, which means “Fraternity”, in dioula, the spoken language for Western Burkina; indeed, the Center in opened to every body, boys and girls, college and university students, Christians and Muslims, the latter being largely the majority in the City.

The Center has a library, a study room or a multi purposes hall, a room to learn about computers, a classroom, and an office for the director of the Center.

It happens quite often that we see these students working under the street lights of the city, either because they have no electricity at home, either because in their tiny homes, the TV or the radio is turned on permanently, so that they cannot study in a convenient way. The Center at Budenya provides them with a proper framework for their studies: a library, and noiseless study rooms.

The Badenya owns a reference library with classroom books, books about the African literature and other books on the school program. We need to have several copies, because when a teacher proposes a book to his students in a classroom of more than 100 ( it happens here) more than two or three copies will be needed. Outside, we find billboards and a storeroom with tables and chairs. 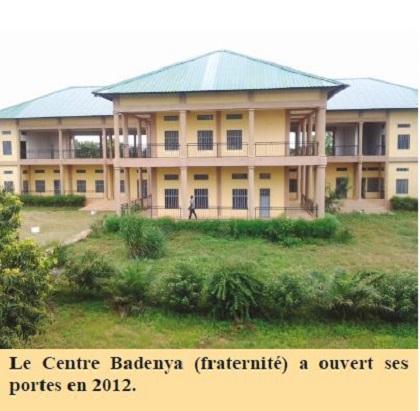 When we are aware that in this City, the number of colleges exceeds more than one hundred (public and private), we understand that the library of the Missionaries of Africa is quite appreciated by the students and the professors.

At the Badenya Center, the pupils and the students find all that they need to study. In Burkina, the rate of success for the High school diploma is around 20% to 25%. A good reason for coming and studying outside the school periods at the Center.

The library owns more than 12,000 reference books and a service of low rate loans is available. The students can also use a room with computers, a conference hall, and different shapes of rooms where than can study in groups from 9 o’clock to 22.

The Center has reached its 6th year. About 2,300 pupils and students have regularly attended the Center since its opening, on October 1st, 2012.

The Key-Problem: frequents power failures in the city of Bobo-Dioulasso.

The power failures in the city, especially during the hot season, is a huge handicap for the students who have to interrupt their works at the library and in the halls.

We would have to buy an electric generator of 33 KVA to make it easier for the students. As many among them (often more than ¾) come to work during the evening, therefore it has become a necessity to have such a generator.

We are grateful for your attention concerning this project. You will allow in this way a great number of students, more than 500, to be able to study in better conditions. The development of the country is the price to pay as we care for the formation of our youth.