'You came to this country with nothing and you will leave with nothing': the story of an exiled family far from home 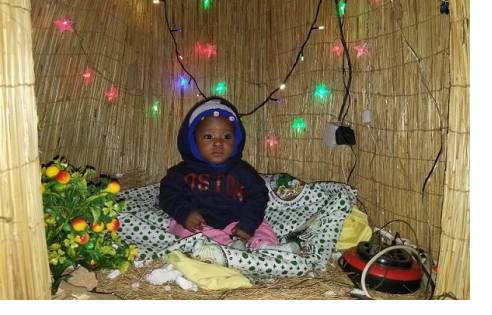 Niamey (Agenzia Fides) - They had left Liberia in 2019, where the civil war forces its population into a daily struggle for survival. An old friend had advised dad Francis, an electrician by trade, to try to revive the light of his life in Algeria, where there was little chance of finding a well-paid job.
Father Mauro Armanino, from Niamey, tells the story of an African family in search of a dignified life. The priest of the Society for African Missions thus retraces the story of the holy family of Nazareth "increased by one". "On Christmas Eve something special always happens," writes the missionary. They arrived together, Francis, Mimi, and two small children. Awa, the girl, three years old, and he, the last one for now, called Success, born two years ago in exile. Once in Algeria, they could not find a shadow of the friend in question, so Francis began working for minimum wage as a bricklayer on the construction sites of Tamanrasset. His wife Mimì, a hairdresser by profession, stays at home and invents cheap hairstyles for the immigrant women who populate the Algerian city. Perhaps to protect themselves from fate or simply to give themselves courage, they have given the little one the only name that could give them a future "Success". The event is not only what has happened, but above all what could happen: new life prospects for those who are exiled far from home".
Francis, like most migrants and refugees on Algerian territory, was identified and, lacking a residence permit, stripped of his belongings and deported with his family to the desert adjacent to the Niger border. "The usual mechanism of deportation and expulsion has characterized Algeria's immigration policy for years. You came to this country with nothing and you will leave with nothing", this is the motto that accompanies the export of "immigrant merchandise", although useful when it comes to exploiting it on work sites. Other threats lurked on the return trip made in a truck carrying onions from Niger to Benin, in the Atlantic Ocean."
There was no room for them anywhere in the city, and while they waited, they have been guests for some time at the main bus station in Rimbo. "They have established unsuccessful contacts with the International Organization for Migration, IOM, which for the moment has suspended new registrations for voluntary returns to the migrants' countries of departure. They live camped out in the waiting room on plastic-covered sponge mats offered by the travel company. A census of voluntary passengers will be carried out in due time, when the IOM offices reopen and are functional. Success was born in exile because his family, to save him from King Herod of the Misery, who wanted to eliminate him in his own country, had him born in Tamanrasset. For now he is safe at the Rimbo bus station in Niamey".