Priest burned alive. "They came to kill",
says the auxiliary bishop of Minna to Fides 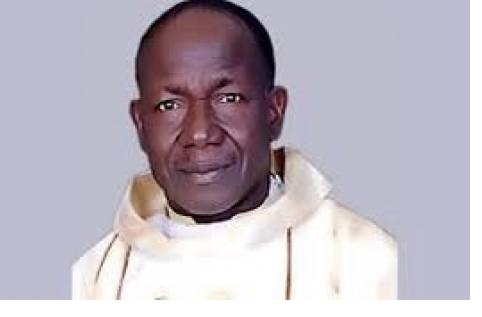 Abuja (Agenzia Fides) - "They have come to kill. If their purpose was robbery or kidnapping, they would have acted differently", says Msgr. Luka Sylvester Gopep, Auxiliary Bishop of Minna, the diocese where the robbery in which Father Isaac Achi died, told Agenzia Fides.
The assault took place at 3 in the morning on Sunday, January 15, when an armed group tried to enter the parish residence of Father Isaac Achi, of the Church of Saint Peter and Saint Paul, in Kaffin Koro, in the diocese of Minna, Niger State, in north central Nigeria.
"Apparently, the murderers tried to enter the house and, failing to do so, they set fire to the house, burning the priest alive. Even before setting fire to the house, the bandits fired indiscriminately. A sign of their willingness to kill", says Msgr. Gopep. According to the Auxiliary Bishop of Minna, "the assault was committed by a band of Fulani herdsmen. But we wonder who sent them to attack the parish house".
In the shooting, another priest was wounded as he was fleeing the parish house. "Father Collins Omeh was shot in the shoulder", said Msgr. Gopep. "He is now in the hospital and the doctors have assured us that no vital organs or important bones have been damaged.
These groups of Fulani herdsmen are now mercenaries. Most are not of Nigerian origin but come from other countries", says another Nigerian Church source. "They were invited by Nigerian politicians in 2015 to wreak havoc in that year's election. They received the promise of being able to exploit pastures in all the states of the federation, a promise which was then not kept due to the opposition of the individual states. Since then they have formed into gangs dedicated to robberies and kidnappings. Or at the service of those who pay them to commit massacres and murders", concludes our source, who requested anonymity for security reasons.
In another area of Nigeria, another priest was kidnapped on Saturday, January 14. Father Michael Olubunimi Olofinlade, parish priest of St George's Church, Omu Ekiti, in the local government area of Oye in Ekiti State, in the southwest of the Federation. "Father Olofinlade was on a pastoral mission outside the parish. His kidnapping occurred when he was returning to the parish around six in the evening", says a statement from the diocese of Ekiti. The place where the priest was abducted is located between Itaji-Ekiti and Ijelu-Ekiti, in the local government area of Oye, about 4 km from the parish".