The memory of Pope Benedict XVI of some African Bishops:
"A great theologian of profound humanity" 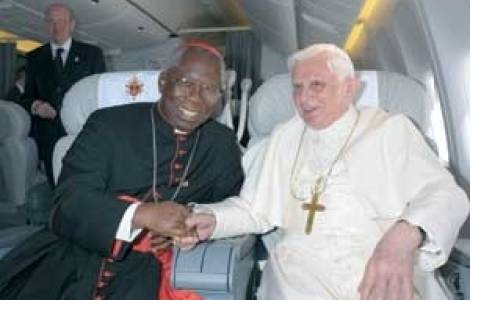 Rome (Agenzia Fides) - The Catholic Church in different parts of Africa remembers Benedict XVI with masses and suffrage prayers.
The Bishops of Uganda, who said they had a close relationship with Pope Benedict XVI, remembered him as a scholar and doctor of the church who helped many of them during his mandate as Pope. They described him as "an eminent theologian and conservative enforcer of the Roman Catholic Doctrines".
The Archbishop of Gulu Archdiocese, His Grace John Baptist Odama described Pope Benedict as a scholar and theologian who loved science.
Msgr. Sabino Ochan Odoki, Bishop of Arua, appointed by the late Pope, recalls that "I was sure that Ratzinger Joseph will be the next Pope and by then I was a rector in the seminary. I said we need a strong teacher and Pope Benedict has been a strong teacher".
Bishop Sanctus Lino Wanok, the ordinary of Lira Diocese who was also appointed by Pope Benedict XVI believes that the world has lost a giant of not only the Catholic Church but humanity as a whole.
In South Sudan Msgr. Stephen Ameyu Martin Mulla, Archbishop of Juba, presided over the mass at St. Theresa Cathedral –Kator attended by top church leaders, diplomats, senior government officials, and congregations to pay their tributes.
Pope Emeritus Benedict XVI was described as "the defender of the truth, especially in the world full of relativism that solemnly downplays the truth of God". "We thank the lord for the life of the Holy father pope Benedict XIV. Pope Benedict was a humble servant, a light who loves his lord dearly. He chose the motto of his pontificate, ‘God is Love’. Pope Benedict should be remembered as a defender of the doctrine of the church", the Archbishop said.
Bishops in the Democratic Republic of Congo (DRC) remember Pope Benedict XVI as a "Worthy servant of the Church, sentinel of the orthodoxy of our faith, great pastor and great man".
For Archbishop Marcel Utembi Tapa of Kisangani and President of the National Episcopal Conference of the Congo (CENCO), "Pope Benedict XVI was a great figure of the Church of our time who passed away". Msgr. Pierre-Célestin Tshitoko, Bishop of Luebo, recalls his human trait, emphasizing that Pope Benedict XVI had impressed him with his fraternal welcoming and his simplicity during his first ad limina visit.