The good seed and the fruits. The long path of Christian proclamation in the Land of the "Mighty River" 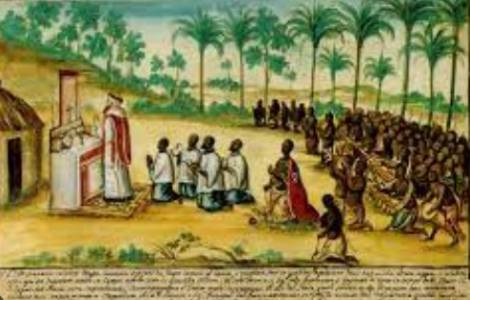 By Crispen Kimbeni, Bishop of Kisantu

Kisantu (Agenzia Fides) - The upcoming visit of Pope Francis to the Democratic Republic of Congo (DRC) offers an opportunity to retrace one of the most interesting adventures related to the proclamation of the Gospel and the transmission of the Catholic faith on the Continent.
A compelling story that takes its first steps in the first kingdoms that politically structured the geographic space today included in the DRC.
Among those ancient political entities, the Kingdom of Kongo, considered by some historians to be the largest on the west coast of Africa, was founded in 1275 by Nyim'a Lukenyi, and expanded geographically in the southern area and along the coastal strip of today's DRC, eventually encompassing the northern part of Angola. The influence of that kingdom projected throughout the surrounding region, as far as present-day Gabon, and remained intense until the arrival of Diego Cão, the Portuguese explorer who in 1482, with his three ships reached the mouth of the "Mighty River", the Nzari, as the Bakongo called the present-day Congo River. The inhabitants welcome the newcomers with great hospitality, to the point that four of them will leave with Diego Cão for Lisbon, with the goal of learning Portuguese and thus serving as interpreters.

During his second trip, Diego Cão was received by King Nzinga Nkuwu in Mbanza-Kongo, the capital, which was 3 weeks' walk from the mouth, in the territory of the present Republic of Angola. Following talks with the explorer, the king sent one of his emissaries to Lisbon to request that missionaries be sent. In December 1490, a group of artisans, peasants, priests and religious set out for the kingdom of Kongo aboard three caravels.

The Apostle of Kongo

In the following year, 1491, King Donzwuau, the queen, Prince Ndonfunsu and some nobles received baptism. With the exception of the prince, the others soon returned to their usual practices: polygamy, fetishism and other religious practices incompatible with the Christian faith.
Facing hostility because of his fidelity to Christianity, Ndofunsu (who was given the name Alphonso at his baptism) had to take refuge in Mbanza-Nsundi. In 1506, upon his father's death, the prince ascended the throne. He reigned until 1543, taking on the image of a "New Constantine" (as some historical sources call him) in the memory of the early Christians there. Alfonso exercised all his powers to make the Kongo kingdom a true "Christian kingdom", earning the title of "Apostle of Kongo".

The Diocese of Sāo Salvador (now Mbanza Kongo) was erected in 1596.
The birth of the Apostolic Prefecture of Kongo dates back to 1640, shortly after the establishment of the Congregation of Propaganda Fide.

The suppression of religious orders

Although it lasted more than 300 years, the process of the "first evangelization" of Kongo did not take deep roots in the region, and ended in fact with the departure of the last two Capuchins in 1835, during the time when religious orders were suppressed in Portugal. Among the various causes that explain the decline of missionary work for the transmission of the faith, in addition to logistical difficulties and political vicissitudes, are the small number of missionaries who arrived in the region and, above all, the high mortality rate recorded among Capuchins sent to the area since 1645. Many of them died upon arrival, others after a few months, struck down by fevers. These were largely Italian Capuchins. The Holy See also aimed in this way to overcome the confusion between evangelization and colonization policies pursued at that time by European powers.

The decline of the Kongo Kingdom and the missio antiqua

Contributing to the decline of the Kongo Kingdom from the 16th century onward was the phenomenon of the slave trade. The situation became so uncertain and at the same time marked by violence that the missionary work, called missio antiqua, undertaken with so much hope and sustained by so many sacrifices, died out, acknowledging the failure.

The "second evangelization" and the apostolic work of the baptized laity

The faith among Christians in the former Kongo Kingdom nevertheless remained alive, even if it is lived in discrete forms. German explorer Adolf Bastian, who reached Mbanza-Kongo in 1857, testified that Christians, while not benefiting from the accompaniment of priests, continued to gather on feast days to pray, sing, and make processions. Parents taught prayers to their children.

Thus, in the western part of the DRC, the "second evangelization" did not start from nowhere, as it did in the rest of the country, where the proclamation of the Gospel was entirely new, and destined to fall in good soil and bear abundant fruit, among populations that shared a great religious sense.

The first "new mission" and the return of religious orders

In 1865, the Holy See entrusted the aforementioned Apostolic Prefecture of Kongo to the Spiritan missionaries. In 1880, the Spiritans founded the first important mission of the "second evangelization" in Boma. Further east, the same year, it was the Missionaries of Africa (White Fathers) who found Mulweva on Lake Tanganyika. The Scheut Fathers arrived in Congo in 1888, the Jesuits in 1893.
The fervor of the new missionaries fueled a new missionary momentum. Thanks in part to improved communication routes, the Church reached the heart of the Continent, not limiting her apostolic work to populations on the coasts or around the mouth of one of the world's largest rivers.

The great explorers and the seed of faith

That was also the time of the great explorers: Burton, Speke, Pogge, Livingstone, Cameron, Stanley, Brazzà... From that season on, a new nation was being formed around the great river that brought together different peoples and cultures within a single state.
Leopold II, King of the Belgians, who had actively supported Stanley's various exploratory missions, made himself recognized by the other European powers as sovereign of the Congo Free State, established in 1885. From 1908 the country became a Belgian colony until June 30, 1960, when the DRC gained independence and international recognition as a sovereign state.
The seed of faith sown over the previous centuries, with many sacrifices, finally began to bear abundant fruit. Today the DRC is a country where the population is predominantly Christian, with Catholics representing the largest group.
There have been difficult periods, with more or less open persecution, and there are martyrs among missionaries and among the native baptized. This is the case of Blesseds Anuarite and Isidore Bakanja, beatified by St. John Paul II in Kisangani, in 1985, and in Rome, in 1994, respectively.

In 1604, King Mani Kongo Ndolovwalu II sent Father Antonio Manuel Nsaku Ne Vunda as ambassador to Rome. The journey lasted more than three years because the ship he traveled on stopped in Brazil and then Portugal, where the diplomat was forced to spend long months. When he finally arrived in the Eternal City, the Ambassador was very tired and ill. Despite the efforts of the doctors that the Pope himself had sent to his bedside, he died after a few days, on January 6, 1608. The event caused a sensation. Nsaku Ne Vunda, known as Negrita, was buried with full honors inside the Basilica of Santa Maria Maggiore, where his funeral monument can still be seen today. It is in this same Roman Basilica where Pope Paul V is also buried, whose epitaph also commemorates the arrival of this Kongo Ambassador.
In anticipation of the act of allegiance that the Ambassador came to perform, on behalf of the King of Kongo, the Pope had a large medal minted with his own effigy on one side, while the other side represents a scene depicting Ne Vunda presenting his credentials. As a caption, the medal bears a Latin inscription that reads: Et Congum agnovit pastorem suum, And also Congo recognizes its Pastor.
In memory of this diplomatic mission, the Pope also had a fresco painted in the Vatican Library, which depicts Paul V imparting the Apostolic Blessing to a sick person he had visited.

In 1518, Ndoadidiki (Henri/Henrique from his baptismal name), one of King Ndofunsu's sons who had a sincere desire to see the proclamation of the Gospel spread among his people, received episcopal ordination in Lisbon. He is the first bishop in black Africa. However, the establishment of a proper hierarchy will only occur at the turn of the 19th and 20th centuries.
The Apostolic Vicariate of the Belgian Congo was erected in 1888, and since then the number of ecclesiastical circumscriptions has increased, hand in hand with the progressive evangelization of the Country.
The first Congolese priest of the second evangelization, Stéphane Kaoze, was ordained in 1917, while the first Congolese bishop was Pierre Kimbondo, ordained auxiliary of Kisantu in 1956. Today the hierarchy in the DRC is composed entirely of Congolese bishops. There are currently 48 dioceses, divided into six ecclesiastical provinces and about 50 bishops. The last diocese, Tshilomba, was created by Pope Francis on March 25, 2022.
There are 4,602 priests engaged in nearly 1,500 parishes across the Country, supported by about 3,500 religious men and 7,500 religious women, not counting the countless catechists and lay people engaged in parish life. As for the number of seminarians, there are about 1,500 throughout the DRC.