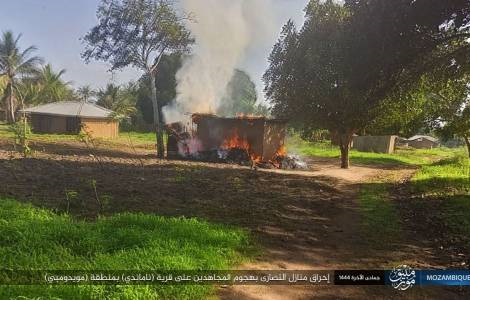 Maputo (Agenzia Fides) – The attack on December 30 on the village of Namande, in the district of Muidumbe, province of Cabo Delgado, in northern Mozambique, has been claimed by ISIS-Mozambique.
The jihadists posted images of the destruction in the village on their social media channels. At least two people were killed and four others were injured in the assault. ISIS-Mozambique claims to have attacked the "village inhabited by Christians" and clashed with "Christian militias", forcing them to flee, capturing and summarily executing one of its members before setting fire to the houses.
In the village of Namande, which is at least 40 kilometers from the district headquarters of Muidumbe (Namacande), there are indeed groups of former militiamen who fought in the ranks of the National Liberation Movement who have organized to confront the jihadists.
Government forces have also launched several operations to stop the rebels in Namande, but clashes, which lasted late into the night, forced some people to leave the town.
To try to contain ISIS-Mozambique, the government in Maputo is resorting to troops sent by the member states of the SADC (Southern African Development Community) and by Rwanda. Ugandan President Yoweri Musevenin also recently expressed plans to provide military and economic support to Mozambique to help fight violent extremism in Cabo Delgado province.